Psilocybin is a psychoactive substance contained in several species of mushrooms, which are consumed recreationally. Psilocybin/mushrooms are categorized as psychedelic drugs (or hallucinogens) and are considered to be a Schedule I controlled substance without any indications for medical use by the United States Drug Enforcement Administration 2. However, there is some evidence to suggest that it may have some therapeutic utility for some conditions, such as depression. Approximately, 1.2 million people over the age of 12 have been reported to be users of hallucinogens, and young people with a co-occurring major depressive disorder have been found to be more likely to use hallucinogenic drugs than those without that diagnosis.

These mushrooms containing psilocybin are typically ingested or drank as a brewed beverage. They are hallucinogenic and people consume it to experience a “good trip”, which are vivid perceptual effects (visual and auditory hallucinations) and changes in perception of time. Sometimes, user experience a “bad trip”, which comprise negative experiences while under the influence, and can have lasting effects on the user. Other symptoms include detachment from reality or self, feeling of spiritual experiences, intense emotions, increased respiration, temperature, and blood pressure, heart palpitations, tremors, loss of appetite, dry mouth, sleep disturbances, nausea, blurred vision, dilated pupils, loss of coordination, paranoia, and in extreme cases, psychosis. These users are prone to injury or death as a result of poor judgment while under the influence of psilocybin. Furthermore, they are also at increased risk of poisoning and potential death from accidentally ingesting a misidentified, poisonous mushroom. 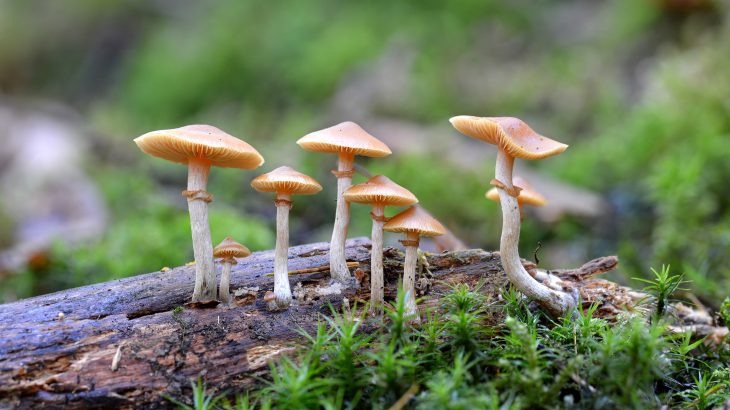 About 4.2% of the users experience what is known as the hallucinogen persisting perception disorder, which includes flashbacks or re-experiencing of psilocybin intoxication despite having abstained from magic mushroom use for an extended period of time.

Persistent use of psilocybin can indeed result in addiction. The signs of psilocybin addiction include craving for mushrooms and spending a lot of time and effort seeking them and using them despite failure to fulfill personal obligations, or having a concern for social/interpersonal problems or health issues. These abusers also repeatedly fail to cut down or quit using mushrooms.

Psilocybin/mushroom treatment becomes necessary for someone who abuses it to the point that they become out of touch with reality. The treatment plan is targeted at weaning them from psilocybin/mushroom dependency. The good news is that psilocybin is not that addictive, so there is no major chemical/pharmacologic dependence; however, the psychological dependence is quite strong. Things get complicated when there is polysubstance abuse. This is not uncommon in these users, as they tend to use other agents as well, such as alcohol, benzodiazepines, stimulants or opioids. Such users would always require a rigorous detox program and rehabilitation in order to have a full recovery. There are various programs especially designed to address not only these addiction issues but also the underlying psychological issues that predispose them to addiction in the first place.

Hashish is a plant derivative substance, extracted from the trichomes, flowers, and fragments of leaves and stems of the cannabis plant. It contains tetrahydrocannabinol (THC), which is the same active ingredients found in marijuana, but at a much higher concentration (up to 15% in hashish as compared to 5% in marijuana). Hash oil is another substance produced by solvent extraction of hashish/marijuana and ends up having even a higher dose of THC.

Based on the way it is prepared, it comes in various forms and preparations. Hash oil comes as a golden syrupy-like substance. Hash is typically consumed by smoking or ingestion, but the effects are much faster and stronger when smoked due to faster entry into the bloodstream through the lungs. How does hashish work? The active substance of hashish, THC acts by binding to cannabinoid receptors in the neurons, which results in physical, emotional, and cognitive effects.

While many studies have shown that there are medicinal effects of cannabis products, particularly a substance known as cannabidiol, it should be noted that the United States Drug Enforcement Administration (DEA) still considers cannabis a Schedule I controlled substance, meaning that it is considered to have no medicinal use and a high potential for abuse.

So what does hash abuse look like? Hashish is typically smoked in pipes or bongs. Some users add hashish to food or brew it in a tea, and other casual ways. However, given the potent concentration of THC present in hashish, it has a higher potential for addiction and more serious side effects as compared to marijuana. The typical signs and symptoms of hash addiction include euphoria, increased relaxation, hunger, sore throat, panic, paranoia, anxiety, tachycardia, hypertension, impaired coordination, lack of motivation, impaired concentration, and hallucinations.

The use of hashish among teens is disproportionately high. There are several reasons for that – most of them having to do that mainstream acceptance and legalization (in some states) of marijuana, and coupling hashish with it as a comparable alternative, which of course, it isn’t. There is a tendency is downplay the potential for abuse, physical dependence, and other harmful effects of hashish. The teens are even more susceptible to its deleterious effects because of their greater propensity for the development of a substance use disorder. They are also more susceptible to peer pressure and having an underlying ADHD or conduct disorder which increases their predilection for hashish addiction, further leading to polysubstance abuse.

Health awareness and education play an important role in helping teenagers understand the hazards of hashish use. Preventing hashish addiction can also prevent falling prey to other even more serious drugs such as heroin and cocaine.